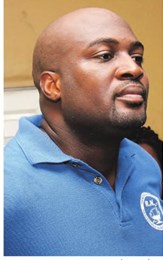 PRESIDENT of the TT Registered Nurses Association Idi Stuart says all is not well with nursing staff at the North Central Regional Health Authority (NCRHA).

He claims they are “extremely demotivated.”

Stuart said this despite the NCRHA’s CeO Davlin Thomas espousing all the advances made by the authority in the past year at its 2018 public meeting, held at the La Joya Complex on Thursday last week. He questioned why the authority was taking experienced nursing staff from the neonatal intensive care unit (NICU) and replacing them with junior staff “straight off the street.”

Stuart had a minute and a half to state his business and was stopped short by master of ceremonies wendell etienne as he peppered board members with questions.

“You are taking out experienced (staff) and bringing in new staff, in a highly intensive care department, nurses who don’t have a contract, don’t have experience, and placing them in a critical area such as the NICU – not even a probationary period of six months, which is mandated by the RHA Act.

“Is it okay to have 236 nursing personnel on continuous temporary contract and getting gratuity and are not entitled to pension?

“You have congratulated nurses so many times today, but the feeling among nurses is they are extremely demotivated.”

In response, CeO Davlin Thomas said the number of nurses was being increased in the NICU to improve patient care by specialised nurses.

Chairman steve De Las explained when the nurses joined the RHAs, they were given contracts which had certain criteria they would have signed off on.

Thomas said, “If by some measure those could be improved or modified to something the other regions are doing, we will be willing to entertain as required. Make your communication to the CeO in writ ing.” stuart accused the NCRHA of not operating with what international best practice dictates –one nurse assigned to four or five patients during the night shift.

“In TT, on the medical and surgical wards, it is a one-to-24 ratio. so how in God’s good name they could deliver quality care? And you will notice that most of the deaths occur during the night and then you want to wonder why.”

De Las also told stuart to send his concerns in writing to the CeO.

“If we are not working with the requirement of the quantity of nurses, which you say we are not, what we have to do is get your analysis and data in writing, we will discuss it and validate in terms of what is being claimed to exist to what actually exists.”

stuart continued: “I commend the authority for providing executive health care for various groups, including the Prisons service, but I call for the same RHA to do the same for their nursing personnel. I recall 177 nurses getting medical check-ups as if it is something so unique. It is the OsH (Occupational safety and Health) law that the hospitals do annual medicals for nurses, and to date we just have 177.”

“You must ensure that the correct tools are there in place, and proper staffing, so we can provide the best health care. we are willing to meet with you on this matter,” she said.

But it was not all bad feedback for the board, as several people from the audience gave testimonials to the excellent treatment they had received at hospitals and health centres under the NCRHA.

Renwick Brown, secretary of the National Carnival Bands Association, said when the NCRHA offered medicals to the members before Carnival this year, some of them realised that this could have been their last.

He said many of them discovered pre-existing conditions they never knew they had.

John Lopez of the Prisons service, supervisor of Brothers’ Keepers, said this was the first time anyone had cared enough to reach out to prison officers to look out for their health.